I was so surprised that my blog was still here and hadn't been deleted by the "powers that be." Maybe that's a sign that I should get back to writing, hmmmm....

Well, let's see...since I last wrote, our oldest son is still a student working on his second Bachelor's degree at a MAJOR university in northeast Ohio. He really enjoys writing and is hoping that this second degree will take him in a direction in which he will get to use his skills. He also has a girlfriend that we have met and like.

Our younger son is finishing up his junior year at a much smaller liberal arts college in east central Ohio and is an officer in his fraternity. He's working on finding an internship for this summer and is majoring in Communication. He has gotten a lot of experience in TV, radio, and print media at his university and really seems to enjoy it.

The hubby has had a rough time as of late. In early February he suffered a stroke. We've been told by several doctors that it is a "recoverable" stroke, but as of yet, he is still numb and tingly on his left side. He's doing physical therapy and occupational therapy twice a week now and that seems to be helping, but he is in no-way ready to return to work. Hopefully in the next few months we may get a "return to work date" and that will make like much easier.

I am still teaching and still enjoying it, although a few more snow days this past winter would have been nice. We only had one. We're just finishing a week of spring break and I think that we'll all be better for it. We (the staff and the students) all needed a little break. We have state testing coming up in a few weeks, so we'll be working hard on that as soon as we get back.

I've gotten into discovering my ancestry over the last year or so and have come across some interesting photos. This is one of my grandparents when they got married in 1931. Grandma's sister (my Aunt Louise) and her husband (my Uncle Jim) stood up for them when they got married. 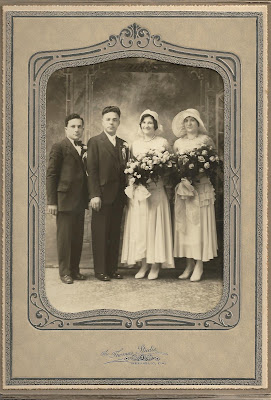 That's about it from here. Hope life has been treating you well!