I've been tossing around the idea of getting a Kindle for a while now. I was actually going to buy myself one for Christmas, then decided to wait it out, sort of hoping it would go down in price. (It hasn't.)

I sent out an email to people in my building, asking if anyone had one and what the pros and cons were. One person (Christa) has one. She even brought it in for me to look at.

WOW. She said it could be dangerous. After about half an hour with it, I totally and completely agree. You can download a FREE excerpt from a book, then if you like it, purchase the entire thing. NY Times best sellers and new releases start at $9.99. Other books can be purchased too, and many for less than that.

You can get newspaper and magazine subscriptions. USA Today is $11.99 a month. Other newspapers are comparable. Newsweek Magazine is $2.99 a month.

I just mentioned this Kindle thing again the other day and Ted suggested that I get an iPad instead. I haven't done any research on the iPad, so I have no idea what all it has on it. I may have to check it out.

BUT...that might not be necessary. You see, I entered a contest at another blogger's site today. She is giving away THREE, count them THREE Kindles, each with a $75 Amazon gift card. Never mind that after only two and a half hours I was "contestant" number 4 thousand and something. I still have a chance to win!

(And no, I'm not going to tell you which blog it is because I don't want to decrease my chances of winning! Most of you already know anyway, sigh.)

Today is March 26. I do not currently appreciate your sense of humor.

Measurable snow is totally and completely acceptable from December 1 through February 28. Any snow before or after those dates must be approved by a majority vote of all those who would be affected by your sudden burst of independence.

I have yet to find anyone in our area who approves of your latest move. Did someone or something upset you? Did you perhaps push the wrong button on the weather computer? Or are you just trying to show us that you can basically do what you want, when you want?

Don't get me wrong...I thoroughly enjoy the snow accumulations you have given us this year, as they were between the pre-approved dates (see above) and resulted in a few extra days off from school. I didn't even complain when you caused us to go over our limit of five calamity days, thus requiring us to make up two days in June. That's okay. I can deal with that.

There must be almost 2" of snow outside. The grass is not visible through the snow. I do, however, find a little satisfaction in the fact that Ted was considering taking the snow plow off the lawn tractor and I told him I thought that would be a mistake. He listened to me.

So, my dear friend Mother Nature, please take note of the date the next time you decide to shower us with the white stuff. It would be greatly appreciated.

We had a very nice day yesterday. Alex came home from college for the day, the weather was gorgeous (and that has such an impact on everything at this time of year), and we attended a family party to celebrate our great-nephew Michael's third birthday.

Oh, and did I mention that Alex brought his girlfriend home with him???

Ah yes...the boy went off to college and got himself one of those girlfriends.
My little baby has ventured into territory I wasn't sure I'd be comfortable with. The child who purposely put mud inside the car when he was about 5 years old, and smeared it all around. The little boy who tried to ride his toy tractor beyond his sidewalk boundaries, and when I told him to turn around, he called me Cruella De Ville. The sweet little thing who would look at me and say "But I love you Mommy" whenever he'd throw up. The angel who couldn't go to sleep without Doggie Doggie every night...
has a girlfriend.
Here's the best part though....
we like her.
We really do. Natalie's not only sweet and kind, but she's charming, intelligent, and beautiful!
She scored BIG brownie points with Ted when she arrived with a box of Anthony Thomas candy. Her mom works there, and Natalie does too during the summer. I'd include a picture of the candy, but it's, ahem, almost gone. Ted let me have a few pieces though. Wasn't that nice of him?
We went to our favorite restaurant for lunch....Bravo. Of course I had to take some pictures. Maybe when Alex sees this he'll realize that his hair is too long. It practically pokes out Natalie's eye. He has an appointment to get a haircut when he comes home for Easter weekend. 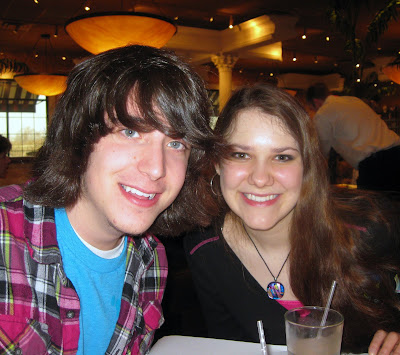 We spent the evening at Peg and Mac's celebrating Michael's birthday and we all had a great time. 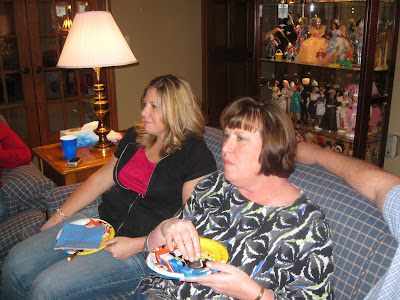 Check out Peg's Barbie collection in the background. She specializes in "I Love Lucy" and "The Wizard of Oz." 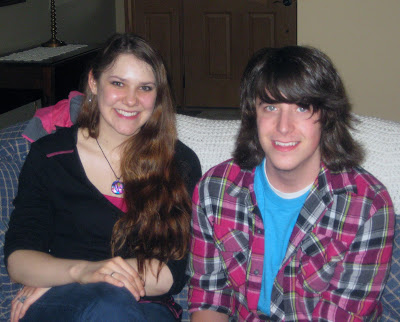 Natalie was great...we had given her a rundown on who was who before we went and she just went with the flow. 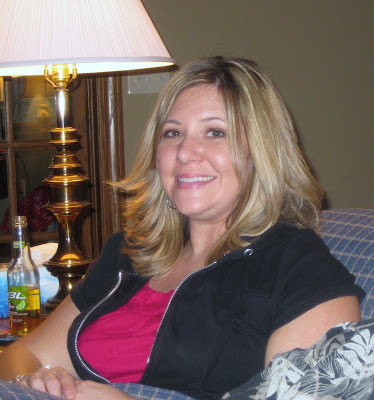 Our niece Holly was busy on her phone throughout the evening, sending and receiving texts, as she and her friends made plans to go to the Kentucky Derby in May. She's also going to Scottsdale, AZ in May, then Tybee Island in September. She loves to travel, and does so whenever she can. Good for her! 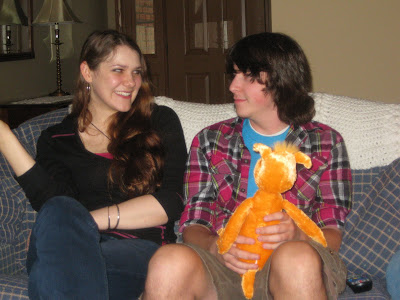 Alex even played with one of Michael's toys and it didn't phase Natalie. Wow, that's impressive. 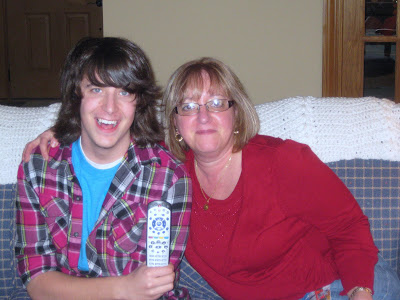 Alex was very busy with the remote control because Peg and Mac have DishNetwork and he was checking out all the music channels. Aunt Patty (also his godmother) tried to distract him, but you can see the death grip he has on it. 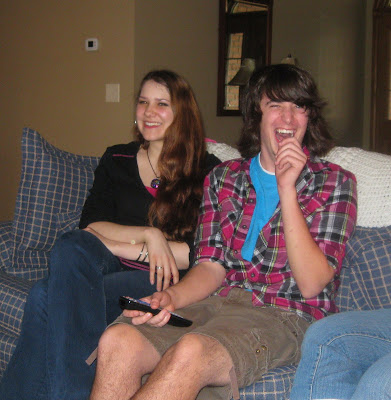 I'm so glad that he feels he can be himself around her and be as goofy as he is normally. Heck, I think she even "gets" his sense of humor. 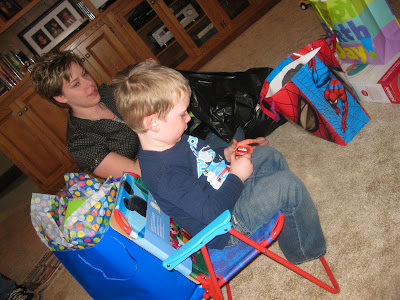 Michael was relaxing in this chair, as his mom Kelly (our niece), looked on. He liked it so much, he took a little break from opening his gifts! 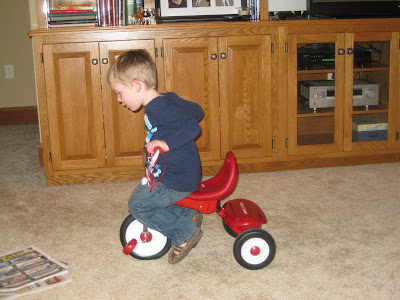 Michael got a tricycle and was trying to figure out the pedal thing. He also got a John Deere tractor and was ready to take it out and start mowing. 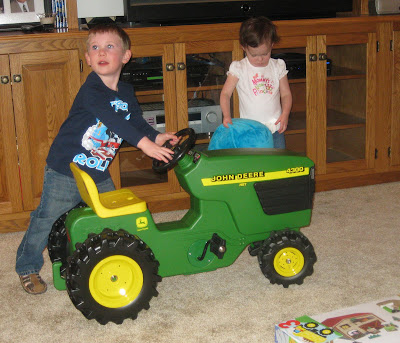 What a nice day!