It's Been a While

Life has sort of gotten a little busy at times, and I've not been blogging. I hope to get back to it soon, and be much more consistent about my posts.

School is going okay. It could be better, but I'm trying not to get all stressed out about things I have no control over. I've been trying to leave work "stuff" at work and enjoy my time at home. I'm also not staying after school nearly as much this year. Those days of staying until 6 or 7 pm, are OVER. It's not that I don't love what I do, because I DO! It's just that the more of myself that I give to my job, the more that's expected of me. I don't mind giving 150% all the time, but it gets discouraging when it's not noticed or appreciated, and then expected.

Like I said, I absolutely love what I do...it's so rewarding to see the sparkle in a child's eye, and a huge smile when they "get" something. It's like they've just discovered a new world! I work with some second graders on a computer program called "Math Facts in a Flash." It breaks basic addition, subtraction, multiplication, and division facts into levels, and a student needs to complete 40 facts correctly in 2 minutes or less in order to go on to the next level. Even though I work with them on their facts, their regular classroom teacher also schedules time for them to work independently on this computer program. When I see these kids in the cafeteria when I have duty, they just love to tell me that they passed a certain level. I try to make them feel like they've won the lottery, because many of them don't get much recognition at home. I love seeing their reactions when I gush over them passing levels. That's what makes my job so great.

So anyway, it's not the kids that make me frustrated, it's the other factors.

Alex turned 20 last weekend, so we told him that we would take him and a couple of his friends to dinner in a city near his college. 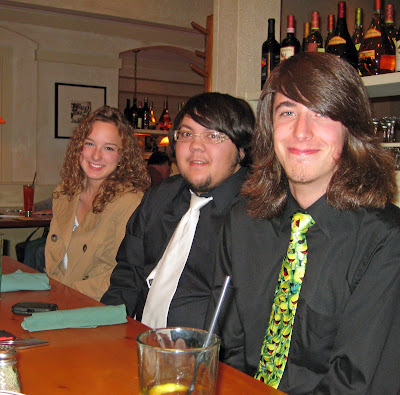 Megan, Tino, and Alex...The guys decided to wear ties. Something about watching "Breakfast at Tiffany's" a few days earlier. Yes, I realize his hair is VERY long. I'm trying to pick my battles. And for the record, he's scheduled for a TRIM the day before Thanksgiving.

A few days after we told him this, he said that he invited EIGHT of his friends! 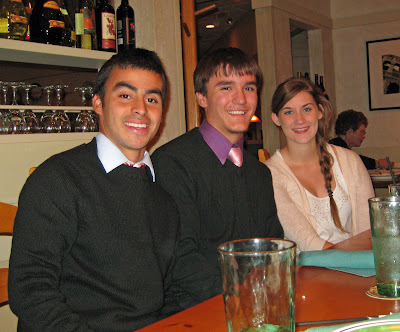 John, Dan, and Emily...they agree that Alex needs a haircut! 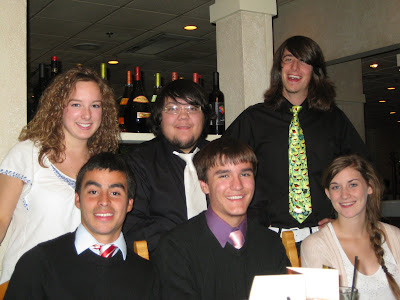 Alex has made some excellent choices with friends. These young people are all very ambitious and I was impressed with their selections of majors and minors.

Apparently I didn't make it clear what was meant by a couple. Alex wanted to go to Olive Garden, and as it turned out, only five were able to make it, but we had a very nice time. Joe was able to join us too. 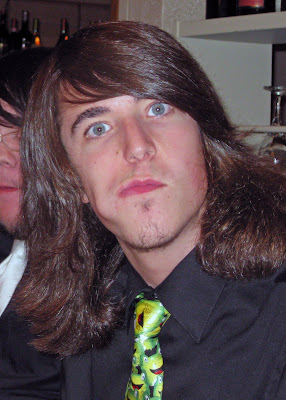 Joe returned to college for an additional Bachelors Degree (this time in Journalism), and it's going quite well for him. This has been a whole new experience for him, as he got his first degree (in Business) while living at home. Now he's living in a dorm on the campus of the second largest university in Ohio. He's actually adjusting quite well.

When they both come home for the same weekend, it's really entertaining. I've walked in from school on a Friday and have seen them both at the kitchen table, with their laptops open, sitting across from each other, discussing music and radio. They both have weekly radio shows at their perspective campuses. Joe has his own 2 hour show on Monday mornings, and Alex co-hosts a 2 hour show on Tuesday evenings. It's as though they can finally have actual discussions about things and not get into a big altercation.

So...life is going okay right now. I'm going to try to be more diligent about updating here. That's my personal goal for the rest of 2010!

Join NaBloPoMo and force yourself to blog every day!

Good to hear from you again also! I have stopped blogging this week. Will get back into it shortly.

Glad to see you posting again!
I can totally relate to making sure you are looking out for and taking care of yourself. If you don't then you aren't any good to anyone.
Those were nice birthday photos. It's good knowing our children have good friends to be with. :-)