As I mentioned about a week ago, Ted had a stroke in early February. He had laid down in bed on a Friday night as we were getting ready to listen to our youngest son's (Alex) radio show from his college. Even though he's been doing a radio show for a year and a half, it was going to be streaming live for the first time and we were so excited to be able to listen to it.

After Alex introduced himself and the first song, Ted rolled onto his side and said, "What's wrong with me? What's going on?"

The dispatcher was absolutely wonderful. He told me to take Ted's hands and have him squeeze mine. He couldn't do it. Then the dispatcher had me ask Ted to smile. He couldn't do it. The dispatcher said that the ambulance was on its way. I hung up, got a robe on (yes I was in my nightclothes), went to the foyer to unlock the door and turn on some lights. When I got back to the bedroom, Ted was "with it" and asked me what was going on. I told him the ambulance was on their way. "For WHO???"

He couldn't believe it.

When the paramedics got here, they were just great. They talked to him, checked his pulse ox and blood sugar. Both were fine. They asked me to describe what happened, and for those of you who know me in real life, you can attest to the fact that I gave a very detailed description. They asked him questions and he could answer them, however his left side was numb.

At some point during all this, I called Ted's brother Tim and told him what was going on. They live behind us and over a little. I figured that they would see the lights of the ambulance and wonder what was going on. Tim answered with "We're listening to Alex right now." Then I had to tell him why I really called. I asked him to call their sister, who lives next door to us, and fill her in since I was going to be leaving in a few minutes. Patty, Tim's wife, called back and said they'd go to the hospital with us. I appreciated the offer immensely, but by this time it was 10:30 pm and I wasn't going to drag them out of the house at that hour. I thanked them, then told them I'd keep them informed.

They were getting him ready to transport him to the hospital, and once he was on the cot, he asked the ultimate question....

"Are we going code three?"

They all laughed then and said it was probably going to be code two.

For those of you who are not Adam-12 aficionados, code three is lights and sirens; code two is just lights.

They left, I got dressed, made a couple of quick phone calls, stopped by my folks' place to pick up my mom (a retired RN who is a wealth of information), and got to the hospital not long after they did.

We were in the E.R. for quite a while, during which time Ted had blood work done, and a CT of the brain. Some time after 1:00 am, the E.R. doctor said that his blood work was good, his CT scan showed nothing unusual, and he felt that Ted had either a mini-stroke or a seizure. He also said they were going to admit him for observation.

Mom and I left shortly after that, and after I dropped her off, I came home and noticed on the caller I.D. that Alex had called a couple of times and knew that he would be concerned that we didn't answer the phone. I texted him and asked if he was still up. He was, and then he called.

I had to tell him what happened, then he said he was coming home even though it was the middle of the night. I told him to let me know when he got here, and at 3:30 am, he woke me up.

The next day we went to the hospital and Ted had a migraine. When he gets migraines, it's not pretty in the least. Alex went back home and got Ted's c-pap machine (for sleep apnea) and brought it in so Ted could get some good sleep. After a while, Ted started throwing up, which is normal for him when he has a migraine. After that, all he wanted to do was sleep.

Later that night I talked to him on the phone and he said he felt a lot better. He also said that there were some tests planned for him, but they hadn't told him when they would be.

Sunday morning he was released and on Monday morning I made appointments for an echocardiogram, carotid artery ultrasound, and an MRI of the brain. After that week of testing, we had to wait until the following week to get the results. The neurologist told us this....

"You had a stroke. Not a mini-stroke, but a stroke. However, it is recoverable. It will just take time."

Ted was a little upset when we left, but we sat on the bench outside the hospital and talked a little. I told him that this was the best news we could have gotten and he looked at me like I was crazy. Then I said that it was NOT an aneurysm; it was NOT a tumor; it was NOT multiple sclerosis; this was the best possible thing it could be AND he would more than likely completely recover from it. I told him we needed to start getting back to "normal," so we decided he could drive home instead of me.

Since then he has changed medical doctors and is almost finished with physical therapy and occupational therapy...two more sessions of each. The neurologist did not suggest the pt/ot, but the medical doctor did. It really has helped.

However, his left side is still numb and tingly. He also gets tired very easily, but it's much better than what it was. He used to take 4-5 naps a day, now it's only one. 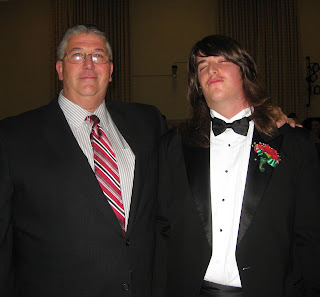 Ted and Alex at Alex's fraternity chartering ceremony in October 2011.

I just keep in mind that it could always be worse.

Wow, Cindi. It sounds like you stayed calm during it all. What a great wife and friend you are to Ted. I'm glad he is doing better. Keep up the positive attitude!

I will come to look at this issue and look forward to!


Here is my Favorites FIFA 16 Coins will sent to you at http://fifa16.vipmmobank.com